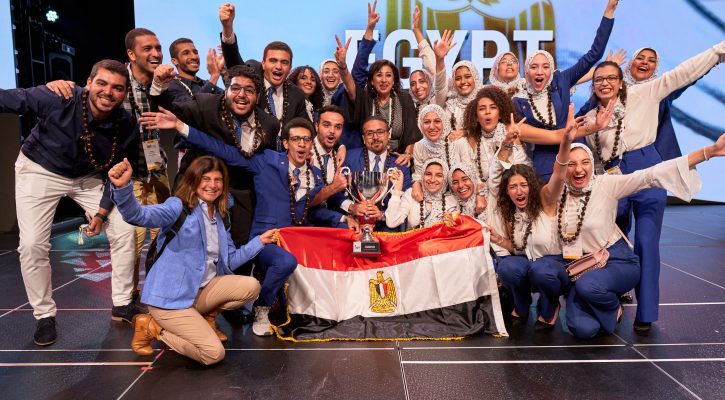 Orascom Construction PLC (NASDAQ Dubai: OC; EGX: ORAS) announces that the Cairo University team has won the Enactus 2019 World Cup Championship for Social Innovation. The team was awarded the Ford Better World Award of USD 50,000 and was followed by the three runners-up from Canada, Germany and the United States. The Cairo University team, sponsored by Orascom Construction and Orange Egypt, represented Egypt on the global stage after winning the Enactus Egypt championship.

“I could not be prouder of the Cairo University team and all of the competing teams,” stated Fatma Serry, President and CEO of Enactus Egypt. She added, “It is thanks to their perseverance, dedication and hard work that they were able to drive real change for their communities. It is a true win, not just for Egypt but for all the countries in which Enactus operates.”

The Enactus Egypt team won for their social enterprise project “Rosie,” which was conceptualized by the Cairo University team and initially started out as a women’s sanitation project. It grew – under the mentorship of the Enactus Egypt advisory board – to become a fully-fledged, self-sufficient social enterprise offering a high-quality organic pad made by women for women. These sanitary pads are made from banana tree fibers and are completely free of plastic, making them affordable, safe and eco-friendly.

“The Cairo University team’s project had such immense potential that we, in partnership with Orange Egypt, opted to sponsor the Egyptian National Champion to compete in the Enactus World Cup. Social entrepreneurship projects such as “Rosie” tackle real issues and effectively pave the way to a sustainable tomorrow led by the teams of today,” expressed Heba Iskander, Corporate Development Director at Orascom Construction. “It was truly a privilege being part of this project and witnessing first-hand its actualization and the lives it touched. We would also like to thank the Enactus Egypt advisory board and other corporates who played an important role in developing the full Enactus Egypt program,” she stated.

The significance of this social enterprise is its actual transformational impact on women’s health, absenteeism of girls in schools, and earned hourly wages especially affecting women in poor and marginalized areas. “Rosie” not only provided a sanitary solution for women addressing the needs of marginalized areas, but also generated income for them, thereby aligning with Sustainable Development Goals (SDGs) 6, Clean Water and Sanitation; 8, Decent Work and Economic Growth; and 10, Reduced Inequalities.

With the approval of the Ministry of Health in Egypt, “Rosie” was able to sell over 90 thousand sanitary pads across the country, and the social enterprise is currently spreading to Uganda and Sudan.

The world’s largest experimental learning platform, Enactus is dedicated to creating generations of entrepreneurial leaders and social innovators that are capable of addressing the most important issues through entrepreneurial-based projects that can contribute to creating a better world.